Arrow’s December releases includes another four films for the UK. Horror fans will be pleased to see one of those titles, The Exorcist III receives a 2K restoration. Let’s take a closer look at all of the Arrow Video December 2019 Blu-ray line-up.

This is the third installment in the Exorcist world and is written and directed by William Peter Blatty. It stars George C. Scott, Ed Flanders, Jason Miller, Scott Wilson, Nicol Williamson and Brad Dourif.

Arrow are releasing a new 2K restored version so this really will be the definitve version.

2K restoration of the theatrical cut of The Exorcist III, presented in High Definition

High Definition Blu-ray (1080p) presentation of two versions of the film, the original theatrical version and the fade to black and white version

You can pre-order now over on Amazon, Zavvi or direct from Arrow Video’s website. I’ve added the Amazon links below which also helps you support our website, all you need do is purchase via those affiliate links to help us out at no cost to yourself.

There’s only one December I’ll be taking a look at, The Exorcist III (1990). I love seeing films being restored and released on to Blu-ray and Arrow Films are one of the best companies for doing just that.

Let me know which films you intend on purchasing in the comments section below. In blu-ray news 101 Films are set to release the … 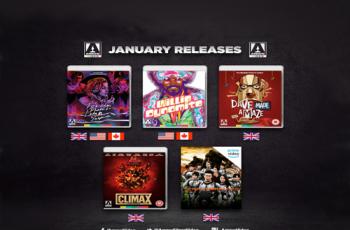