Arrow Video recently announced their line-up of films for March that are due for release on our favourite format, Blu-ray. Personally nothing really stands out as a must have title, may be The Ring Collection will be Arrow’s best seller for the month. In any case here are the details of those upcoming Arrow Video March 2019 Blu-ray releases.

The Ring Collection includes The Ring (1998) which has undergone a brand new restoration from a 4K scan of the original camera negative of Ring. Furthermore it’s apparently being approved by director of photography Junichiro Hayashi.

Meanwhile Kolobos (1999) is an American horror film from directors Daniel Liatowitsch and David Todd Ocvirk.  It stars Amy Weber in the lead role, while Strip Nude For Your Killer (1975) which is only out in the USA and Canada is a giallo film.

You can pre-order now over on Amazon or direct from Arrow Video’s website. Sadly with HMV’s future unclear the option to purchase from the high street is looking like a thing of the past. That’s all of Arrow Video’s Blu-ray Releases for March 2019. I’m not planning on reviewing any of these upcoming releases at this time.

That concludes the Arrow Video March 2019 release line-up, hopefully April will bring some real gems. Don’t forget to take a look at our 2018 Blu-ray awards, Arrow has several titles on the best releases of the year category including Candyman (1992) and Twelve Monkeys (1995). 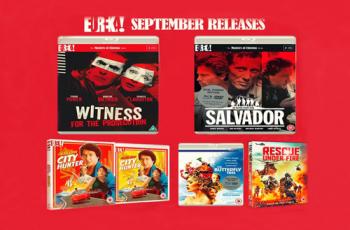 101 Films are releasing, Jeepers Creepers Reborn on both blu-ray …