Are you ready for some more upcoming Blu-ray announcements? Arrow Video recently unveiled their May 2019 release line-up which consists of no less than six UK releases. The stand out film for me has to be the Spaghetti Western The Grand Duel (1972) starring Lee Van Cleef. Other than that I’d say it’s not a particularly great month of releases however I could be mistaken as I’m unfamiliar with a couple of them. Let’s take a closer look at what we may be purchasing and watching in a couple of month’s time. Here are the details of those upcoming Arrow Video May 2019 Blu-ray releases.

A Spaghetti Western directed by Giancarlo Santi that stars Lee Van Cleef. The film is also known under two other names, Storm Rider and The Big Showdown. This version has also been restored having undergone a “New 2K restoration from the original 35mm camera negative”.

All six films are out in the United Kingdom whilst the USA/Canada have three with The Grand Duel (1972), Trapped Alive (1988) and Yakuza Law and come out a day later than in the UK.

You can pre-order now over on Amazon, Zavvi or direct from Arrow Video’s website. While HMV may have been saved there still no way to order online as yet. I’ve added the Amazon links below which also helps you support our website, all you need do is purchase via those affiliate to help us out at no cost to you.

I think the only film I will definitely be reviewing is the Lee Van Cleef Spaghetti Western, The Grand Duel (1972) so keep an eye out for that one. It should however be a very good Blu-ray release having undergone a 2k restoration.

That just about concludes our look at the Arrow Video May 2019 Blu-ray titles, hopefully you will find something of interest. Now I wonder what they have lined up for June??? 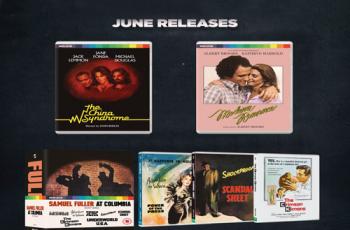 Here are the Indicator June 2018 Blu-ray releases which have …