As a site dedicated to film and television it’s always great to see classics make it on to Blu-ray providing they are restored to a high standard. So it will come as no surprise that most of our favourite Blu-rays of 2018 were indeed older titles. As has become accustomed its time to dish out a few awards and in doing so highlighting those films and television offerings that are worth picking up. So without further ado here’s our Popcorn Cinema Show Blu-ray Awards 2018 list.

Label That Goes The Extra Mile 2018

PowerHouse Films continues to up its game getting better each year by selecting interesting titles and adding excellent extras. Arrow Video won this award last year and was very close to retaining it. Both companies really do go the extra mile when it comes to releasing films on Blu-ray but there can only be one winner. My hope is other labels will take note and follow their example and to be fair Studiocanal has done just that.

A good example of Indicators excellent work are with their boxset releases such as Hammer Volume Two: Criminal Intent and Hammer Volume Three – Blood And Terror. Both comes packed full of interesting extras whilst the most important thing, the picture quality are flawless.

This award goes to Powerhouse Films Indicator label for continuing to select a varied and interesting set of titles. A few of the more interesting ones released in 2018 include:

Meanwhile the runner-up also deserves a mention with Studiocanal starting off 2018 with Hammer’s To The Devil A Daughter (1976) and proceeding to delight all of us John Carpenter fans by releasing Escape From New York (1981), The Fog (1980) and They Live (1988) on 4K & standard Blu-ray.

However they did make a mistake by failing to recognise the draw of Carpenter by only putting out Prince of Darkness (1987) on Blu-ray. Surprisingly the 4K collector’s edition was nowhere to be seen. Clearly following outcry by fans they decided to rectify this and the 4K collector’s edition is out on the 18th February 2019. That doesn’t help those of us that already bought the standard version, like myself, but it’s good to see them listening to feedback. It’s not like the picture quality is really amazingly better on 4K its more that it’s the collector’s edition that draws me to obtain a copy.

It really has been a great 2018 for Indicator and all of us film fans. Anyway on with the rest of the Blu-ray awards 2018!

Network continues to impress with their film and classic television releases on both Blu-ray and DVD. Having already re-mastered several classic TV series in 2018 the standout title has to be a DVD release. The Goodies: The Complete BBC Collection not surprisingly sold very well. 2019 looks like a strong start to with both Sweeney films due for release on Blu-ray in February.

This is one of those films that is often referred to as a cult classic and one things for sure an awful lot of you bought the limited edtion which ended up being extended to 10,000 copies. Following that sales success Powerhouse released the standard blu-ray edition which you can still obtain from either their website or over at Amazon.co.uk

Best of the Rest on Blu-ray (By Label)

These are some of the other titles that really impressed and I highly recommend you consider (Amazon UK links included).

Whilst this is the Blu-ray Awards 2018 I have decided to include a Blu-ray/DVD category next as a lot of classic television only comes out on DVD.

Who doesn’t love the Goodies? It’s incredibly zany comedy starring Tim Brooke-Taylor, Graeme Garden and Bill Oddie. If you grew up in the seventies then this is a must have DVD.

Most Disappointing Blu-ray Releases of 2018

Eureka Entertainment won this award last year and whilst they also have one of my best releases of 2018 with The Old Dark House (1932) which was excellent they seem to release anything they can get their hands on. The issue with this release comes from not releasing a re-mastered version only a high definition transfer with poor picture quality or as I put it in my review:

There are plenty of tiny speckles and the image is far from sharp at times. There’s little doubt The Barefoot Contessa is in need of some restoration, unfortunately this is merely high definition transfer and not a great one.

I’m really disappointed with this release I mean come on it stars Humphrey Bogart and Ava Gardner.

Meanwhile Network’s Norman Wisdom release of There Was a Crooked Man (1960) also disappointed with poor image quality, you can find out more in my review.

Most anticipated Blu-ray Releases 2019 (So far)

There have been lots of great Blu-ray and DVD releases throughout 2018 and there are still several labels going strong and delivering quality releases. This is incredibly encouraging and whilst there are still too many poor titles landing on Blu-ray for my liking fortunately companies such as Powerhouse Film and Arrow Video are still ensuring quality comes first. I’m of course referring to picture quality and none more than Arrow who commissioned several 4K restorations in 2018. They have shown they are film lovers just as much as we are, in fact you can also add a third label to this list with Studiocanal.

Of course they all realise there still a big market for remastering old classics and putting them out on to physical media such as Blu-ray and long may it continue. There are still several other companies releasing content other than the big studios like Warner or Universal. Eureka Entertainment, Network, Second Sight Films and 88 Films have all put out good or even excellent releases in 2018 but they have also put out some poor ones to. Second Sight Films at least seem to try to put out the best versions.

One sad event that happened over Christmas in the UK was music and film retailer HMV announcing it was to go into administration. However whilst physical sales continue to decrease there’s still a huge market for them amongst films fans over 35. Special and collector’s editions continue to sell well and there are a lot of film collectors out there who want a disc rather than streaming. In fact I’d still say no streaming service comes close to the clarity of image quality that standard Blu-ray offers. You can forget about streaming at 4K as the variable quality due to download speeds really doesn’t cut it. I’d much rather have the physical version any day and so would many of you it would seem.

I guess there really isn’t an easy way to operate a bricks and mortar store these days and the only way HMV could survive is to be a purely online business. Let’s hope there’s a happy outcome in 2019.

That concludes my Blu-ray Awards 2018 overall it’s been another excellent year for film fans and 2019 already has a few good titles scheduled for release. 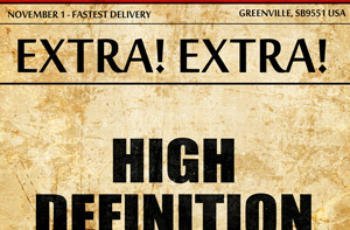