With Halloween fast approaching you may well be looking for a few horror films to watch in the coming days.  As luck would have it there are plenty of quality titles available to purchase on Blu-ray at really decent prices with some ridiculously low.  So let’s take a look at some of the best Blu-ray deals in the UK, these are all via Amazon.co.uk.

For £19.99 you could be watching the Hellraiser Trilogy of films starring Doug Bradley as Pinhead.  The films (1987-1992) are based on author Clive Barkers novels with him directing the first one.  If you purchase directly from Arrow Video’s website you will be paying £37.99.

If you prefer a little more comedy horror then you can pick up the excellent first three Scream films in one collection for a mere £8.99.  Looking for something a little nastier then how about all seven Chucky films for £39.99 this one’s only just come out so it a little on the pricier side.

Next up at a very reasonable £12.99 are the original seven Nightmare On Elm Street movies starring Robert Englund, no remakes here!  Stephen King films are always a favourite and you are in luck as the recent three film collection consisting of IT mini-series, The Shinning & Salem’s Lot can be had for £19.99.

Many of these films have been had the Blu-ray versions reviewed here on the website so you can find out what they are all about if you are unfamiliar with some of them. 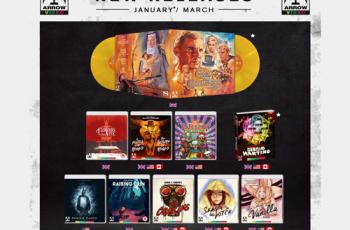 Here are the Arrow Video March 2018 Blu-ray releases which …