It’s time to take a look at all the new releases out on Blu-ray this week in the UK.  There’s not too much out this week with Brian De Palma’s Carrie (1976) based on the Stephen King novel the big release.  Time to take a look in a little more detail, these are the new Blu-ray Releases 16th April 2018.

I’ll start with Carrie (1976) from Arrow Video, you may have missed the special edition that came out some months ago, December 2017 in fact.  The disc content appears to be the same on this standard version but the 60 page booklet is not included.  This is my pick of the week as this is indeed a 4K restoration making the film look pretty amazing on standard Blu-ray.

Staying with Arrow Video and they also have a boxet out this week, Seijun Suzuki: The Early Years Vol. 2 Border Crossings: The Crime and Action Movies which includes five films:

Switching to one of Arrow’s other labels Arrow Academy sees Sleeping Dogs (1977) starring Sam Neill. Looking for some animated fun then 20th Century Fox have Ferdinand (2017).

Rounding up the rest of the new releases starting with Warner Bros Suicide Squad: Hell To Pay (2018) whilst Kaleidoscope Home Entertainment has the Antonio Banderas film Unchained (2017) although that one’s showing as out of stock on Amazon.co.uk at the time of writing.

As there are not too many new Blu-rays this week I decided to pick out a couple of the recent DVD releases that you may have missed.

Studiocanal have recently put out a lost episode of the TV series The Avenger which has been lost for 55 years. The Avengers – Tunnel of Fear is available now on DVD.

Doctor Who fans will be pleased to see a special edition of the Patrick Troughton story Doctor Who – Enemy of the World.  Speaking of Doctor Who there is a brand new restoration of Tom Baker’s Doctor coming to Blu-ray on 11th June 2018, Doctor Who – The Collection Season 12 (Limited Edition ) which has to be a must have for all fans of the sci-fi series.

Fans of the classic western TV series Rawhide can now pick up season four on DVD with future series planned throughout the year.  One other DVD worth a look and it’s the horror film Terrifier (2016) which makes its way on to DVD thanks to Signature Entertainment.

That just about concludes the new Blu-ray/DVD releases this week, check back next week for more or you can always stay up to date by looking at our Release Dates page. 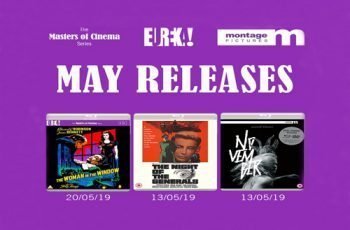