It’s time to take a look at all the new releases out on Blu-ray this week in the UK.  Powerhouse film’s Indicator label has four new titles out this week including the Jack Nicholson film The Passenger.  If that’s not to your liking then how about Gumshoe (1971).  So let’s take a look in a little more detail, these are the new Blu-ray Releases 19th March 2018.

Moving on to Arrow’s offerings and there is one release containing two films with A Pistol for Ringo & The Return of Ringo: Two Films by Duccio Tessari.  For those unfamiliar with these films they are Spaghetti Westerns.

Rounding up the rest of the week’s new releases are the comedy Daddy’s Home 2 (2017) and The Age Of Innocence (1993) starring Daniel Day-Lewis, Michelle Pfeiffer and Winona Ryder.

Quite a few interesting releases this week from Powerhouse films.  That just about concludes the new Blu-ray releases this week, check back next week for more or you can always stay up to date by looking at our Release Dates page. Acorn Media are set to release George A. Romero’s The … 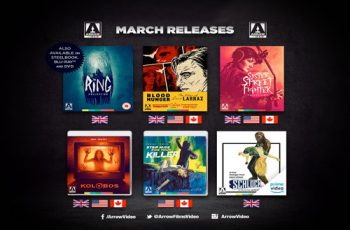 Arrow Video recently announced their line-up of films for March …