Every Monday I look through all the new Blu-ray releases, as well as the odd DVD out that week, and select my pick(s) of the week. Here are the Blu-ray Releases 27 June 16

The 27 June 2016 sees just the one new release on region B (UK) Blu-ray that is of interest to me. That film is The Seven-Ups starring Roy Scheider.

So what is it about?  Well it’s a kind of cop action thriller in which Roy Scheider plays a New York Police Department detective attached to a squad known as ‘The Seven-Ups’.  However they are seen as corrupt and out of control by many of their colleagues.

I think for those of you unfamiliar with The Seven-Ups and for those of us needing our memories refreshing . So a quick look at the trailer may be required.

The Seven-ups is available now on Blu-ray priced from Amazon.co.uk

Don’t forget to check back every Monday for our picks of the weeks new releases on Blu-ray & DVD.

I believe that now is the best time for film / movie buffs.  Why? We have the opportunity to revisit films we love or discover some older gems that now looks absolutely fantastic having been digitally restored.

Is this the kind of film you would buy on Blu-ray?  Have you seen it, as always we would love to hear from you. 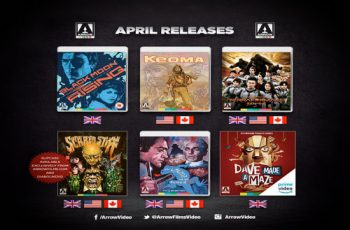 It’s time to find out what Arrow Video have up … Every film seems to be receiving a 4K upgrade at …