Today I’m looking at a 1969 film starring the outstanding Burt Lancaster. This one’s a war film that’s a little on the surreal side, anyway it has recently been released on Blu-ray thanks to Powerhouse Films. So without further ado here’s my Castle Keep Blu-ray Review.

Major Abraham Falconer predicts that the Germans will attack through the Ardennes and see the perfect strategic point to hold the advance at an old Castle. In fact Falconer refuses to abandon the castle and fall back despite being urged to do so.

Based on the Castle Keep (1965) novel by William Eastlake

The film is directed by Sydney Pollack with the cinematography handled by Henri Decaë. This bizarre take on war sees both the comical and sheer futility of it all. There’s no doubting this is one hell of a strange and surreal film.

It’s certainly a pretty good looking film, set during the snowy landscape of France. The use of several flashback type scenes with weird imagery flashing through frames during key scenes only serves to add to the unreal feeling the film has.

The music is by Michel Legrand and creates a surreal feel that the films visuals re-enforces.

The main character in Castle Keep is that of Major Abraham Falconer played by Burt Lancaster. The film is incredibly bizarre and Lancaster certainly holds your attention throughout.

I’d never seen Castle Keep until now and I’m still not sure what to make of it. Strange, bizarre, comical and surreal are all words that I have used throughout this review.

Watching Burt Lancaster sat on a white horse trying to round until troops falling back from the front lines only for them to be hit by artillery is just one of the those surreal moments.

Make no mistake you are unlikely to have seen any other war film that depicts things quite like Castle Keep.

It’s said this is an anti-war film and having recently reviewed another anti-war film Paths of Glory there is no doubt Castle Keep is vastly weirder.

I’m not sure they managed to fully pull of what they were intending or maybe that just me. That said the film industry does indeed need to try new things or the medium as it is today begins to struggle against the television networks such as HBO and Netflix. They were brave enough to try something audiences would not necessarily flock to in 1969 and years later I guess Castle Keep is regarded as something of cult movie.

In many ways the strangeness of the film reminded me of The Ninth Configuration (1980) in that you really weren’t sure how you were supposed to feel. I guess it challenges you to think about the subject matter that little bit harder.

Did I enjoy it? I not so sure, can I appreciate it as a piece of filmmaking? Absolutely, I’m just not sure I’ll be re-visiting for a little while.

If you like my Castle Keep blu-ray review you may want to check out these films:

The picture quality in general is a far higher resolution than previous versions meaning it’s sharp and clear. The colours look right but unfortunately this Blu-ray release is let down by speckles of dirt that persist through the film.

The Blu-ray box claims this version is a “High Definition Re-master” but I’d have to say this looks more consistent with a simple HD transfer.

Without doubt this is the worst Indicator Blu-ray release in terms of picture quality. The blame however probably lies with Columbia from whence the master came from.

Let’s not go over the top it certainly more than watchable however it is more than a little disappointing these marks weren’t removed like on all the previous Indicator / Columbia Blu-ray releases to date.

I would still recommend purchasing it if you are a fan of Castle Keep this is still the best version of the film available to date.

Overall very interesting set of extras with the Burt Lancaster interview about his film career my personal highlight. 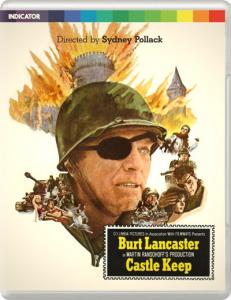 A strange and surreal look at war set during WWII at Castle Keep that’s at times baffling. 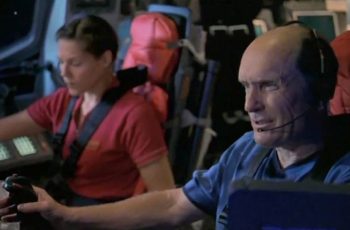 Here is my Deep Impact blu-ray review, are you ready … 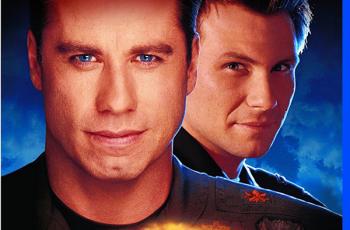