One thing most film fans look forward to is the announcement of which titles are coming to our favourite format for watching movies, I talking about Blu-ray of course. PowerHouse Film’s Indicator label has to be one of if not the best for releasing interesting titles that have been fully restored.

Recently they announced their January line-up which includes the Charles Bronson action movie Breakout from 1975. The film also stars both Robert Duvall and Jill Ireland and is one I will personally be looking forward to watching and reviewing.

So what of the rest of upcoming January titles? Well here’s the list in full all of which release on the 21st January 2019: 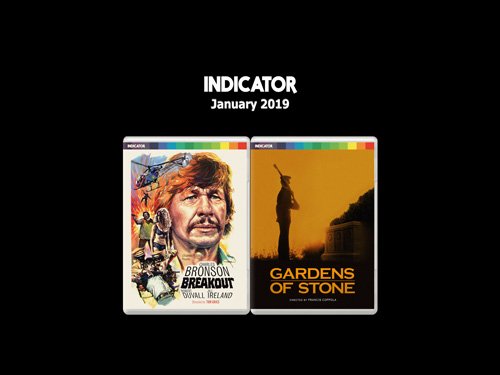 Next is R. P. M. (1970) a drama film by Stanley Kramer and features Anthony Quinn and Ann-Margret. Lastly is the Dennis Hopper directed film The Last Movie (1971), this one’s also a drama in which he also stars.

Pre-order now over on Amazon.co.uk or if you prefer directly from Powerhouse Films website.

As I mentioned I will definitely be reviewing the Charles Bronson action film Breakout (1975) but I’m not sure if I will get around to obtaining copies of the others for review.

and now for The Last Movie… Studiocanal are on a roll with their “Vintage Classics” range … Second Sight Films are bringing out The Witch 4K UHD …