Time for a look at another cult film that has arrived on Blu-ray and this one’s a Chuck Norris action flick. So here is my Delta Force 2 Blu-ray review.

The DEA ask the US army Delta Force team to aid them in extracting drug lord Ramon Cota (Billy Drago) from South America. The two Delta Force operatives Col. Scott McCoy (Chuck Norris) and Maj. Bobby Chavez (Paul Perri) succeed in bringing him back to the US to face criminal charges. However the judge grants him $10 million dollar bail which he can easily afford and is set free.

Ramon Cota is not a man to be crossed and pays Maj. Bobby Chavez’s family a visit whilst he is out. When Bobby returns he finds the police at the scene of a bloodbath.

Major Chavez wants revenge but his friend and college Scott McCoy advises against it. He doesn’t listen and goes to kill the drug lord, however things go badly wrong.

Scott McCoy is now the one who will bring Cota to justice one way or another!

Plenty of action, expect helicopters, planes and gunfire! With a reasonably varied set of locations this all adds ups to a decent looking film.

The pacing is pretty much right with the action starting early on in the film.

I’m not sure what the budget for Delta Force 2 was but I’m guessing it wasn’t that big, so they concentrate the money on the action scenes which obviously plays to the film strengths. There’s a nice skydiving scene early on in the film and plenty of of helicopter gun and rocket fire.

Does a decent job conveying the impending action and violence.

The characters are a little one dimensional we don’t really know too much about the main characters. Chuck Norris plays Col. Scott McCoy part of the Delta Force Special Forces team. All we know is he is a highly trained bad ass who will get the job done. Some may complain at the lack of characterisation but I think this is fine for a pure action flick.

Norris plays his usual type of character and does it very well, a slightly reserved and not too much to say kind of guy. When he does speak you should listen as you are likely to be coming off the worse.

Billy Drago as Ramon Cota is a cold ruthless killer, he trusts no one and is prepared to be the one doing the killing. Drago plays this kind of well to a point but with no redeeming qualities this just makes it a good v evil battle to the end. I think we all know which character will prevail in the end.

Whilst the acting in Delta Force 2 is not fantastic it’s not that bad, it’s good enough not to ruin the film.

If you have seen any Chuck Norris films before Delta Force 2 you will realise this is Norris doing what he does best, plenty of action accompanied with a dry delivery on lines.

The plot may not be the most complex but is enjoyable enough allowing the action to flow.

It may not be the best film ever but it’s hugely entertaining and I do have a general liking for these kinds of films.

The news is far from good I’m afraid to say. General picture quality is poor, if this is a high definition transfer the original must be in pretty poor shape. It’s not particularly clear whilst the majority of the film has a noisy blurry effect going on. This may be down to the type of film it happened to be filmed on (maybe a cheaper kind of film?). Next on my list of complaints is the amount of speckles and marks that persist throughout the film.

I can safely say that NO restoration work has been done to Delta Force 2. So a largely terrible Blu-ray release from 101 films, but whilst they may have released Delta Force 2 in the UK it’s actually a MGM film. That means MGM make the original film masters available for companies such 101 films, Arrow Video etc..

This happens with most other film companies, however most other companies restore to some degree their films first before licensing them to the smaller labels to release on Blu-ray. MGM don’t seem to really value their own films or customers, so it falls on a third party to restore them and most of these small labels are not really in that business.

If you want to know more on this see my High Definition Transfer means a great Blu-ray right?

The Blu-ray box claims “Never before released on Blu-ray in the UK” It may well be the first time on Blu-ray but that rather gives the impression of increased picture quality, I see no evidence of that.

If you like my Delta Force 2 Blu-ray review why not take a look at these films:

So 101 films are not lying with their claim and there is no mention of it being re-mastered or restored anywhere on the box. That said the main reason most people buy these older films on Blu-ray is to experience them with a clean and sharp image. Misleading perhaps??? After all DVD’s work on Blu-ray players so where’s the benefit of purchasing it again on Blu-ray.

I simply can’t recommend you buy this on Blu-ray if you already own it on DVD. Maybe one day someone will bother to restore and re-release it the way it should have been in the first place. Here’s hoping!

That’s my Delta Force 2 blu-ray review, if you have any thoughts on this film leave them in the comment section. 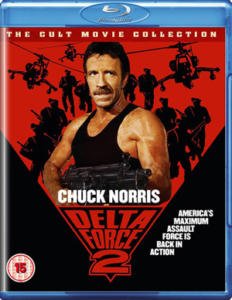 Plenty of explosive action make this film a must for Chuck Norris fans. Sadly the Blu-ray version has awful picture quality! 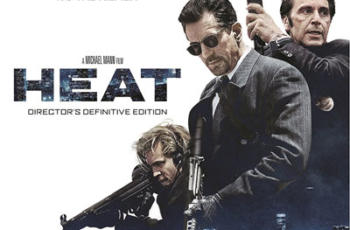 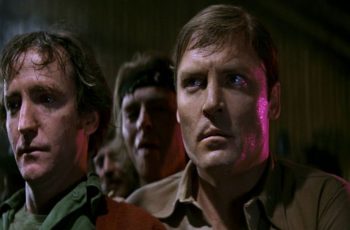 So now to another cult classic recently released on Blu-ray …