A Satanic cult, led by Baron Corofax (Peter Cushing) abducts tourists for ritual sacrifice. However Father Roche (Donald Pleasence) will attempt to save them.

There’s great news as with most Powerhouse releases, The Devil’s Men has undergone a 2K restoration.

Powerhouse Films are including two versions of the film, The Devil’s Men is also known as Land of the Minotaur in the US. The American version is considerably shorter coming in at 86 minutes as opposed to the UK version of 94 minutes.

It’s worth noting that this is a limited edition of just 2000 copies so you may wish to pick this now. That said there will no doubt be a standard edition blu-ray that follows at some point in the future.

Will you be getting The Devil’s Men (1976) on blu-ray? Are you like me a fan of both Peter Cushing and Donald Pleasence? Let me know over on our Facebook page. 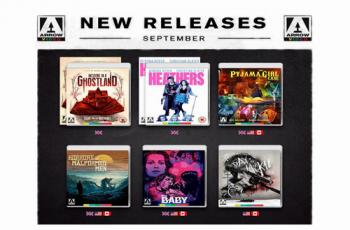 Septembers 2018 Blu-ray Releases have now been announced and like …