Eureka Entertainment April Releases sees three more films make it on to Blu-ray. Whether or not they have been fully restored I will discuss later in this article. Just what’s on offer this April 2019? Well for a start there’s a Finnish horror film, a 1943 drama and a comedy from director Billy Wilder that stars James Cagney. Let’s take a closer look along with a few film trailers at Eureka’s upcoming releases.

I’ve long expressed my concerns over Eureka Entertainment’s quality control on its Blu-ray releases. They seemingly release anything they can get their hands on. That means if a restoration has already been done then great but if one hasn’t it still makes it on to Blu-ray. The whole idea behind upgrading films to Blu-ray is to have the best possible experience and that means the films need properly restoring. When you consider many people will have already purchased these films several times, be it on VHS or DVD, then Blu-ray really needs to be worth another purchase.

Thankfully most of Eureka’s competitors have long since grasped this concept. You only need to look at companies such as Powerhouse Films, Arrow Video and Network to see many excellent restored titles.

The Eureka titles to stay away from until the reviews are in are the ones which simply say “1080p presentation on Blu-ray”. Personally I don’t care how many extras they include if the picture quality is no better than the speckle ridden DVD I already own. You might think that at least the higher resolution would make it worth a purchase but sadly this is rarely the case with films such as The Barefoot Contessa and The Vikings simply not appearing to be any better than their DVD counterparts.

In fact you can learn more in my article titled ‘High Definition Transfer means a great Blu-ray right?’.

With that all out of the way and hopefully another nudge to Eureka to change its ways I continue with their April line-up.

I have to admit to not knowing too much about this one, it’s a 1943 drama based on the novel by Franz Werfel. It’s directed by Henry King and stars Jennifer Jones, William Eythe, Charles Bickford, Lee J. Cobb and Vincent Price.

Unfortunately the Blu-ray release is only stated as a ‘1080p presentation on Blu-ray’ which as I mentioned above rarely bodes well. In any case its out on the 8th April 2019 in the UK, fingers crossed it’s a good print.

Next up also out on the 8th is the Finnish horror film The White Reindeer from 1952. This is another film I’m unfamiliar with, it’s written and directed by Erik Blomberg. If you are planning on buying this one there’s some welcome news, it’s been restored with the description stating:

Take a look at the trailer released by Eureka below:

Lastly comes the James Cagney comedy One, Two, Three from 1961. It’s directed by Billy Wilder and is out on the 15th April 2019 in the UK. I’ll add the trailer below although I hope Eureka’s version is far better but I’m not holding my breath as the description merely states ‘1080p presentation on Blu-ray’.

You can pre-order these Eureka Entertainment April 2019 Blu-ray titles now over on Amazon but not as yet on Eureka’s own site at the time of writing. That’s all of Eureka’s April Blu-ray releases I may take a look at the James Cagney comedy, One, Two, Three (1961) so keep an eye out for the review.

If you do decide to purchase any of these April titles all state they are: Arrow Video are bringing Mary Shelley’s Frankenstein to both 4K … 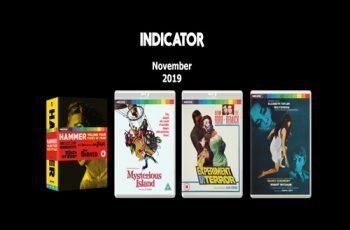