Do you remember watching the BBC television supernatrual story Ghost In The Water from 1982?

The late seventies and early eighties produced some really special TV programs some of which have not been seen for many years and worse still have largely been forgotten about.

Thankfully Simply Media has delved into the archives and dug out this little gem and made it available to everyone on DVD.  What’s the story about, let’s find out here’s my Ghost In The Water DVD Review.

When Tess and David are given a school assignment looking into the death of a young woman in the 1860’s Tess begins to sense a link to the departed victim.

Aided by her friend David she begins to investigate the circumstances surrounding the young woman’s apparent suicide.

Ghost In The Water was directed by Renny Rye who would later go on to direct the magnificent TV series The Box of Delights.

There is no doubting Ghost In The Water is shot very well with some nice camera angles helping to create that uncomfortable and unnerving feeling.

The music is provides an unnerving and tense feeling which suits this supernatural tale perfectly.

Judith Allchurch plays the main character a fourteen year old schoolgirl named Tess who is determined to find out the true cause of the death of a young woman in the 1860’s.

She is helped by her school friend David and the two become obsessed with finding the truth, however none more than Tess who seems to have a family connection.

These two actors do a good job and keep you invested in the storyline.

Ghost In The Water aired on the BBC in 1982 on New Years Eve.  I grew-up watching things like Ghost In The Water on television during the eighties and there’s no doubt a lot of filmmakers that are aiming for the older children’s audience could learn a lot from this little gem.

You simply have nothing like this made anymore and it’s a real shame, I suppose that in the seventies and eighties a lot of older Children’s television was a lot more adult in nature and maybe that’s why they hold up so well all these years later.

This new DVD release whilst far from looking perfect is more than watchable.  It suffers from quite a bit of noise and there are marks throughout.  However the mere fact that it has been released in the first place is a cause for celebration.

I applaud Simply Media for making this available on DVD and hope they can bring a few more gems like this to DVD in the future.

If you happened to grow-up in the eighties then Ghost In The Water is a must see.  On the extras front there is a three minute clip from Blue Peter featuring a preview.

Ghost In The Water (1982) DVD is available now from Amazon.

If you like my Ghost In The Water DVD Review here are a few other TV series available now:

That’s my Ghost In The Water DVD review, do you remember it? If you have any thoughts on this film you can leave a comment over on our Facebook page.

We have plenty more Reviews and DVD News across the website. 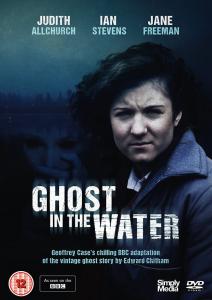 A cracking little ghost story as seen on BBC television in 1982.