It’s time for the Going In Style blu-ray review, I do like a good comedy but find most of Hollywood’s current crop absolutely terrible. That said I’m hoping the old guard of Caine, Freeman and Arkin can change that. So without further ado let’s take a closer look at Going In Style (2017).

Joe Harding (Michael Caine) is at the bank one day discussing a rather nasty letter that threatens to take his home away from him. Suddenly bank robbers burst in and steal lots of money. He and his two friends Willie Davis (Morgan Freeman) and Albert Garner (Alan Arkin) all face their retirement funds being taken away way by a combination of a corporate takeover and those nasty bankers.

What’s one do in that situation? Why rob a bank of course!

Based on Going in Style by Martin Brest.

Directed by Zach Braff whom is best known for playing J.D Dorian in the TV series Scrubs. First off I really like the look of the film it’s very well shot and slickly moves between scenes. The pacing is perfect allowing the characters plenty of time to develop and have several silly situations occur before the main event.

A light flowing soundtrack that conveys the comedic tone of the film whilst also able to reflect the more moving scenes, this suits the film perfectly.

The music is provided by Rob Simonsen.

The main characters are Joe (Michael Caine), Willie (Morgan Freeman) and Albert (Alan Arkin). These three have been friends for years and would do anything for each other. This tight bond really comes through but despite this their personalities are all very distinct.

Joe is the most dominant of the three and seems to the one the others two look to when things go wrong. Willie is the laid back one and Albert is the miserably one waiting to die.

They are a joy to watch and deliver fine comedic performances.

Backed up by a really good support cast of Matt Dillion, Christopher Lloyd and Ann-Margret this really improves the overall experience. Christopher Lloyd is true to form playing an extremely whacky character, the way only he can.

Going In Style is a truly funny and uplifting film starring three top actors. The chemistry between them really makes the film work and work very well. If that sounds like the type of film you like I’m sure you won’t go far wrong with this one.

If you like my Going In Style blu-ray review you may want to check out these films:

Not much in the way of extras other than a commentary and a few deleted scenes. it would have been nice to see a couple of interviews from the main cast.

Going In Style (2017) blu-ray is available now from Amazon.

That’s my Going In Style blu-ray review, if you have any thoughts on this film leave them in the comment section below: 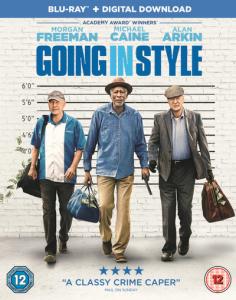 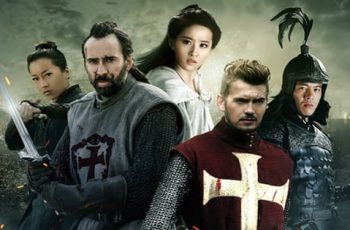