It’s time for the Sabotage blu-ray review, if you love a good Schwarzenegger film then you would no doubt have been looking forward to Sabotage back in 2014. I know I was, but was it actually any good?

Sabotage is the story of a group of DEA agents that specialise in infiltrating and taking down Columbian drug lords. When one such operation results in $10 million going missing the team find themselves under investigation.

John “Breacher” Wharton (Arnold Schwarzenegger) is the leader of the group of DEA agents suspected of stealing the money. Furthermore his team seem to be out of control on drink and drugs.

When members of the team begin to turn up dead homicide detective Caroline Brentwood and her partner Darius Jackson find themselves investigating the murders. The murders appear to have been carried out by a Columbian hit squad that has been made aware of the theft.

The film has that fly on the wall documentary style with the camera following the action closely and moving around quite a bit. I’m not a huge fan of this style generally however on this occasion it works perfectly and is the correct choice. It’s mainly used when the team are entering a building to clear it of bad guys.

If you love action then this film has it in abundance, in fact this is possibly Schwarzenegger hardest hitting and most realistic action flicks to date. It certainly pulls no punches that’s for sure.

Directed by David Ayer, with the cinematography being handled by Bruce McCleery.

The music is by David Sardy and provides a nice tense tempo style that fits the film like a glove.

With so many key characters the film does a good job of developing all of the characters just enough to have you invested in their fates.

Schwarzenegger plays the main character John Wharton aka Breacher. He is the leader of a DEA team detailed with bring down drug cartels. He plays this incredibly well, he is a hard ass but this is not the usual funnier Schwarzenegger.

The rest of the team are made up of a strange and disturbing bunch, no more than the only female on the team, Lizzy Murray played by Mireille Enos. She is off her head on drugs most of the time which surely can’t be the best idea when in charge of a fire arm.

Most of the team are interesting making it all the better viewing.

Next up is police detective Caroline Brentwood played by Olivia Williams. This where the film begins to run into a little trouble and seems to have been rectified to some degree in the edit. I’ll go into more detail later on.

Put simply detective Brentwood is a tough no nonsense cop who finds herself drawn into investigating the deaths of DEA agents. She is not a terrible character but the film struggles to know if it’s her story or Breacher’s we are watching.

It’s incredibly violent and disturbing at times but make no mistake this is also one of Schwarzenegger’s best films to date. The film is at its best focusing and Breacher and his team and at its worst when focusing on Brentwood’s investigation.

Fortunately the main focus ends up being more on the DEA’s side of things.

The end result means Sabotage is an outstanding film and one I highly recommend you watch and pick up on blu-ray.

If you like my Sabotage blu-ray review you may want to check out these films:

Clearly the picture quality is not an issue being a 2014 released film. However the Blu-ray does throw up some potential answers to the films focus in the extras with the deleted scenes / alternate endings.

You see what they show are in effect two or three very different films.

What needed to be established from the very beginning was whose point of view the story is being told from.

Next on the list of problems that occurs in one of the alternate ending is what has to be one of the most ridiculous endings to a film I’ve ever seen. We see a Brentwood / Breacher fight scene which lasts an eternity. I mean he knocks seven bells out of her, punches her full on in the face, she then rolls him over and gives as good back. It’s completely farcical so much so words fail me.

Without spoiling the real ending the other alternate ending feels so over the top and out of character from everything you have watched up until that moment.

It really does look like they had too many ideas and no real idea of what the story was meant to be. I mean I really wouldn’t have included them on the Blu-ray as it shows how the film was really fixed in the edit and by re-shooting key scenes.

The good news is the the final film does end up being a very good one despite those carried over ideas poping up every now and then.

That’s my Sabotage blu-ray review, if you have any thoughts on this film leave them in the comment section below. 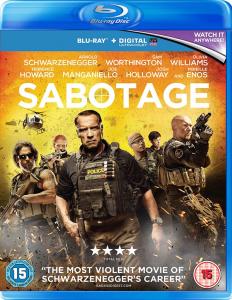 It’s incredibly violent and disturbing at times but makes no mistake this is also one of Schwarzenegger’s best films to date. One thing I really like about Nicolas Cage is that …