Network are set to release the classic British comedy The Sandwich Man on blu-ray later this August 2022 in the UK.

The 1966 film, directed by Robert Hartford-Davis features an all-star cast as you can see below.

Whilst this sounds like a good release I’ve noticed that Network’s use of the phrase “High Definition Remaster” actually seems to mean they have simply done a High Definition Transfer.

If that is the case here, like it has been with many of their previous blu-ray remasters I’ve looked at, then no real remastering will have taken place. What that tends to mean is a release with of dirt marks (speckles) on the image.

It’s a real shame as when the term remaster is used by other companies such as Powerhouse or 88 Films it means the picture quality has had work done on it.

In fact Network actually uses the restoration label when any significant work has taken place by them and displays that tag on the blu-ray artwork which is great.

I hope I am proved wrong and this turns out to be a outstanding release. I’m keen to see if this release is really worth the upgrade.

With all that said may be the extras will make this blu-ray release worth purchasing.

Alternatively you can purchase directly from Network’s website for £11.50

Does this British comedy interest you? Will you purchasing this new release by Network or wait for the reviews first? 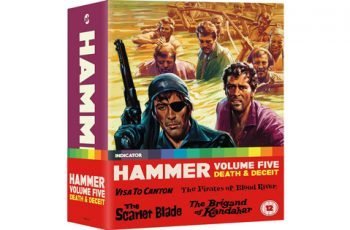 If like us you are massive Hammer film fans then …