Eureka Entertainment is releasing Three Monster Tales Of Sci-fi Terror on blu-ray this April. The three films included are Man-Made Monster, The Monolith Monsters and Monster on the Campus.

Meanwhile The Monolith Monsters (1957) is a b/w science fiction film based on a Jack Arnold and Robert M. Fresco starring Grant Williams.

Eureka Entertainment makes no mention of any of these being restored only listing them as 1080p presentations. I think these sci-fi films may require a closer look!

Three Monster Tales Of Sci-fi Terror blu-ray releases in the UK on the 11th April 2022.

Are you a big fan of black and white classic sci-fi horror films? Will you be getting the Three Monster Tales Of Sci-fi Terror blu-ray? Let me know over on the Popcorn Cinema Show Facebook page.

Don’t forget to check back soon for more news of UK blu-ray film and TV releases. There are two new Disney offerings, Encanto (2021) and Eternals … 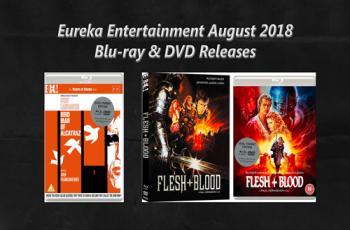