It’s time for the To Live And Die In LA blu-ray review, I’m a big fan of a lot of William Friedkin’s work especially films like The French Connection and The Exorcist.

I have to admit I’d never seen this 1985 action thriller, In fact I don’t remember ever seeing it on UK television, something that should be corrected in my opinion.

Secret Service agents Richard Chance and Jimmy Hart are looking into a counterfeiting operation lead by Eric Masters. He is an expert counterfeiter flooding the market with $20 dollar bills.

When Chance’s partner Jimmy is killed just three days before he is due to retire, Chance decides to do whatever it takes to bring Masters to justice even if it means bending or breaking the law.

The film is directed by William Friedkin with the cinematography handled by Robby Müller.

If you have seen The French Connection you will have an idea of what to expect. Yes there is indeed the obligatory car chase which is done exceptionally well. With perfect pacing, nice action sequences everything is made to look as real as possible.

Aside from the car chase the rest of the film is shot beautifully, LA looks fabulous in that gritty way Friedkin likes to show. This is more the industrial side of LA with train tracks and storm drains playing a prominent role. It really does feel like a lot of care has been put into every scene.

Simply put I have no real criticism of the way the film looks.

The music and main theme are pretty awesome, it provides the perfect action tempo for the film. It’s very memorable and I do like film music to be memorable outside of the film. The music is provided by the British group Wang Chung and it fits perfectly in the action sequences as well as for the general tone of the film.

Everyone cast in the film seems to be perfect for the roles they are assigned. Now you can’t say that for most movies.

William Petersen plays Richard Chance a secret service agent whose partner has just been killed. He is a little bit of an adrenaline junkie and loves his job. When his partner is taken out he is determined to bring the murderer to justice at any price. He is the lead character and Petersen plays it exceptional well always having that on the edge kind of feel.

John Pankow plays John Vukovich, Chance’s new partner he is a more by the book kind of agent which causes him a conflict of interest as Chance is willing to break the rules. He doesn’t believe in snitching on his partners even when they bend or break the rules so finds himself in an impossible position. Pankow delivers a very good and believable performance that really does add to the overall quality of the film.

Now on to Willem Dafoe, he plays the villain and expert counterfeiter Eric Masters. He is a strange character and Dafoe is perfectly suited to this role. He’s brilliant at his job but also has a bit of dark and controlling side. He really is an excellent choice for the role.

The women in the film play a key role with Debra Feuer playing Bianca Torres, Eric Masters’s girlfriend. She has a strange relationship with him, there is definitely a spark between them. Her character is bi-sexual something Masters seems to be more than happy with.

Other notable characters include Darlanne Fluegel as Ruth Lanier, she is out on parole and working for secret service agent Richard Chance, providing him with information. Then there is Dean Stockwell, he plays Bob Grimes, Masters Attorney.

As I said earlier I don’t think there is a bad performance anywhere to be found.

To Live And Die In L.A is a thrilling ride from start to finish, just when you think you know where the film is going everything is thrown into chaos. It’s without doubt a cult classic, I for one will be watching it again and again. It has a great cast, plot, director, music and of course outstanding car chase what more could you want from an action thriller.

Add this one to you must see films list.

If you liked this To Live And Die In LA Blu-ray review don’t forget to check these reviews:

Conclusion: To Live And Die In LA Blu-ray Review

It’s had a 4K restoration and looks pretty amazing. I will just say like The French Connection this film does have a certain amount of film grain, that is simply the way it was shot. The balance struck in the restoration is pretty much perfect and I have no problems with the picture quality. It’s great to see another classic film being restored to such a high level.

If you are a big film fan then this set of extras will be exactly what you want. It comes with a nice detailed booklet and a heck of a lot of interesting extras detailing the making of the film, how and why Friedkin choose Wang Chung to provide the music. If you liked the stunts in the film then the stunt co-ordinator will go through in detail just how they arrived at each of the main set pieces.

Overall an excellent and informative set of extras. Top marks to Arrow Video for this UK Blu-ray release.

That’s my To Live And Die In LA blu-ray review, if you have any thoughts on this film leave them in the comment section below: 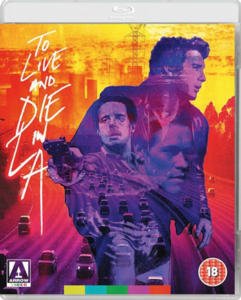 William Friedkin is on top form with this exciting must see 80’s action thriller. 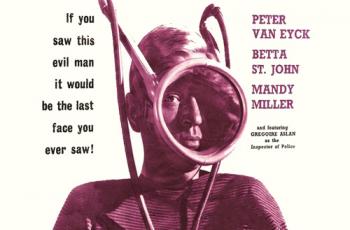 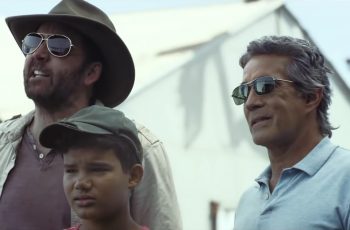 Are you ready for another Nic Cage movie? Of course …